Yesterday morning, my parents were so eager to try some new desserts, and my mother specially, who is a marvelous cook and adores all kinds of desserts... so when it comes to raw... she just indulge in its preparation and invites friends and family to try it.

That Sunday morning, she decided to do the Tiramisu, which came up to be super delicious, and she has received really remarkable comments from our relatives who were visiting that evening.

Me, personally, been having an overloaded month, full with preparations of projects and presentations, so been kind of late on my blog and follow ups... though promise that won't last long... for so, and in order not to let this super outstanding Tiramisu get out of the way, both my mother and father together have helped in the preparation and shooting the pictures, so I can share it with you live on raw love recipes.

For the soaked items of the day before:
Rinse well the cashews and almonds. Discard the soaking water.
Filter coffee, keep the infusion and throw the powder. keep the infused coffee water aside.

Make the Almond milk with soaked almonds and 500ml (2 cups) of water (check the sesame milk, use the same steps but with Almonds instead of sesame)

Put the water and agar in a saucepan and bring to a boil, keep stirring often. Meanwhile, remove the cake from the freezer and set aside.
Two minutes after the boil, put the mixture water / Agar-Agar in the blender with the other mix and let it run a few seconds.

Pour the mocha right away on the cake. Return to the freezer and let it set. 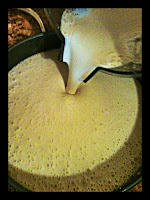 Rinse the cashews that have been soaked for 4 hours and discard the soaking water.

Place all the glaçage ingredients in a blender. Add 250ml (1 cup) almond milk and mix until having a uniform liquid and creamy.
Put the water and agar in a saucepan and bring to a boil, keep stirring often.

Just before serving, sprinkle with cacao powder.
* Can be conserved 10 days in the  fridge in an airtight container, or 4 months in the freezer.

La Reina
Reina Hallab, a passionate, intuitive, caring and loving being. She is a bundle of energy, enthusiasm, knowledge and confidence and has such a thirst for life. Her sensitivity to people's needs and insight into their potential is unmatched. She will guide you towards success in a gentle but determined manner. Reina impresses people with her holistic approach to mindset. She is someone that walks the talk. She will show you how healthy eating benefits the body, mind and spirit, as well as is crucial to the welfare of our planet. Reina follows her inspirational mantra: "Life, is a delicious meal, prepared with organic ingredients, wrapped with love, and sent to you from the universe. Before you open to taste, make sure to read the label. It contains: Pure love, freedom of being, respect to self, self-love, self-appreciation, worthiness, lots of happiness, full of positive moments, incredible synchronicities, and a strong intuition"

Promote Your Page Too